The Indian Ministry of Defence wants to increase the arsenal of armed and unarmed UAVs in the service of its defense forces and local companies are joining forces with leading Israeli companies to offer different types od drones. These joint ventures will compete with American manufacturers trying to get a slice of the growing Indian market for different types of UAVs.

According to the deal, HAL will produce a significant portion of the Israeli-developed UAVs in order to comply with the “Make in India” program.

The collaborative venture, according to Avi Bleser, IAI director of marketing in India, aims to provide the Indian armed services with cutting-edge UAVs.

“The joint venture will provide two options – purchase or lease – and will also be involved in modifying the UAVs to comply with Indian laws.”

The Heron Mk2 and Tactical Heron (T-Heron) are the first two variants made available to the Indian military services, according to Bleser.

The Heron Mk2 has a wider and longer fuselage than the Heron-1, to allow the installation of additional payloads. MTOW is 1350 kgs. Max payload weight is 470 kg.

“The new design and especially the new improved engine gives the MK2 a climb rate that is 50% greater than the Heron-1 is capable of.” Bleser said. The MK2 has an endurance of 45 hours.

The Heron Mk2 can “fly the mission,” according to Bleser, which means that the platform adapts to the mission profile. “To do that, we installed a dedicated mission computer and a flight control computer.”

Both a satellite communication system and a line of sight communications system are included in the updated version . “The improved communications links enable the MK2 to use a large number of payloads in parallel and transmit the data to the different customers” Bleser added.

The Mk2 is offered with a variety of dedicated payloads: for ground, air and maritime missions including anti-submarine.

IAI claims that the Heron MK2 can use its integrated satellite communications system to land and take off in inaccessible locations. When the UAV must operate continually without returning to its home base, this functionality is crucial. The Heron Mk2 is capable of making autonomous landings on distant runways thousands of kilometers away, where it is attended to by a tiny crew and basic fueling infrastructure before departing on another mission.

According to IAI this capability is based on advanced satellite communications systems, combined with precise automated takeoff and landing. The company says that the new capability also leads to substantial savings in command stations and flying staff resources since it eliminates the need to return to the original takeoff point for fueling, thus saving on flight time and fuel. This, IAI says, increases the operational availability in the mission area and provides several options for routine and emergency landing.” With the new capability, Heron Mk2 is used in even more complicated and challenging missions” Bleser said

The new capability was developed based on operational demands that are the result of a long series of tests performed by the flight test squadron of the Israeli Air Force (IAF).

The second type offered by the new joint venture is the Tactical Heron (T-Heron).

According to Avi Bleser, the T-Heron is designed for use by ground troops and coastal guards, as well as by other protection forces.

“With a versatile design and suitable for a variety of payloads, it features the most advanced IAI technologies”.

This UAV can fly at a max altitude of 24,000 feet, a speed of 120 knots, and supports 4 useful payloads concurrently with a total weight of up to 400 pounds.

The T-Heron complies with global standards, including STANAG 4671 requirements.

The T-Heron UAV has a retractable nose landing gear, to allow a radar payload an unobstructed field of view.

The T-Heron has a full automatic and landing (ATOL) capability.

Sources said that Elbit Systems, another Israeli big manufacturer of UAVs, is negotiating a similar joint venture with an Indian company for the same purpose.

As mentioned, the Israeli companies with their Indian partners will face very fierce competition with American companies negotiating joint ventures for the manufacture of their UAVs in India

As Washington pursues tighter ties with Delhi as a strategy to challenge China, a top Pentagon official announced recently that the two countries will co-develop UAVs.

“India will build these aircraft and export them to other countries in its region,” this official said.

Delhi wants to diversify its weaponry, which is mainly Russian-made, and also develop its own defence industry. 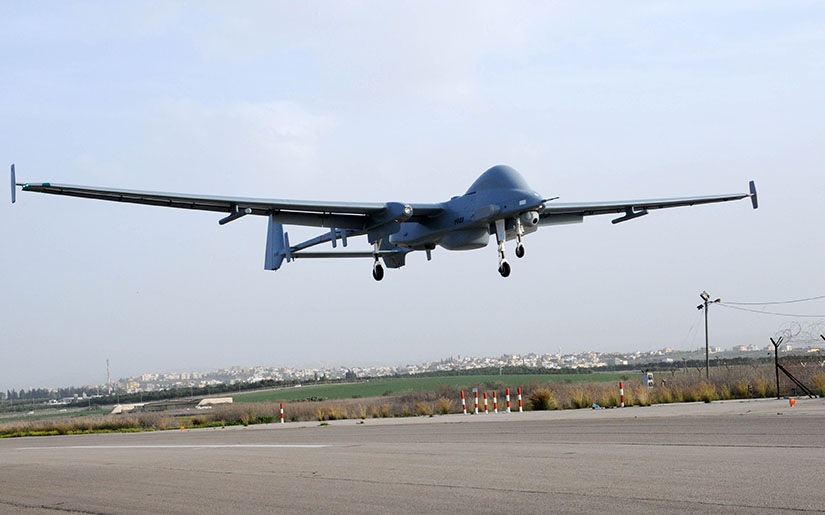