At the beginning of December, the responsible persons of the State Military Technical Institute of the Czech Republic (Vojenský technický ústav, s.p.; VTU) and ESG Elektroniksystem- und Logistik-GmbH signed the contract for the delivery of the “Automated Fire Control System and Support, AFCS” for the armed forces of the Czech Republic.

The contract covers the delivery in 2024 of a version of the ADLER III C4FS* system adapted to the customer’s specific requirements, as well as a current standard version for installation at the Czech Republic’s military university in Brno by the end of this year. The Czech partner company RETIA, a.s. is providing support as a sub-contractor.

The C4FS system ADLER (Artillery, Data, Situation, Deployment and Computer Network) is an in-house development of the German Armed Forces and is further developed and maintained by ESG on their behalf. Within the framework of a licencing agreement, ESG markets ADLER internationally, whereby the Bundeswehr benefits from licencing income in the event of a sale.

For more than 25 years, the German artillery has been using ADLER, a powerful digital tool for exchanging target and combat information and for creating a digital situation picture, which has proven itself many times over in exercises and operations. With the rollout of ADLER III in all artillery units, the Bundeswehr now has a continuous and real-time capable sensor-to-shooter network at its disposal, which is no longer limited to the sensors and effectors of the German and allied artillery, but can also access the effectors and sensors of the air force and navy of German and allied armed forces. International partners are connected by using the cooperation programme ASCA (Artillery Systems Cooperation Activities), which ESG has also supported from the beginning for the German customer. ESG thus comprehensively supports the German artillery in the realisation of key (digitisation) projects concerning joint fire support: including the Joint Fire Support Coordination Group, the Joint Fire Support Tactical Data Links Interface Group or the Joint Fire Support Team training simulator.
In addition to Germany and the Czech Republic, Lithuania and Switzerland have also been ADLER user nations for several years.

ESG is a leading German company for the development, integration, operation and in-service support of complex, security-related systems, mission equipment, software and IT.

ESG is a certified aviation company for aircraft and aviation equipment for the Bundeswehr (German Federal Armed Forces) and an aviation engineering company in line with EASA Part 21J, EASA Part 21G and EASA Part 145.

As a reliable technology and innovation partner for the armed forces, public authorities and industry worldwide, ESG has provided tailored customer-specific solutions, services and products for security in all dimensions of a networked world for over 50 years. 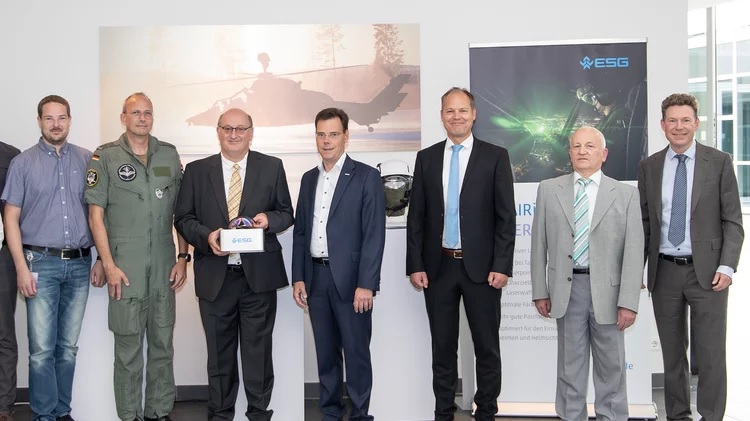 ESG hands over visAIRion laser safety glasses to the Bundeswehr